Acronis True Image Home 10.0. Licensing, Requirements, Features & More. Acronis Backup Software Creates Large Incremental or Differential Backup Archives. Actually Acronis 2010 does works with Windows 10. It won't install on Windows 10 natively but if its on a Windows 7 partition that is upgraded to Windows 10 it remains and works fine. I bought 2016 but honestly I am disapointed with the UI and the fact that it appends verbage to the backup file name.

What do you mean by 'copy an NT hard disk'?

I mean take a backup of a hard drive with NT4 operating system on it. What I need to do is take a backup then restore it to a blank disk thus making a copy or a clone of the original. As I say this worked fine on version 9 but does not work on version 10. If upgrading to say 2013 would fix it then I would probably do it but before I spend money on an upgrade I was just trying to see whether anyone could help with the problem and tell me if an upgrade would do the trick or whether something was changed in version 10 and that change remains in place for subsequent versions.

You must clarify 'does not work'. We can't help you with such inadequate information. Provide detail of what you did, what happened, exact quote of any error messages, etc.

I am not staff and am not paid. I provide help on a volunteer basis on my own time.

Thanks tuttle for your voluntary help.

As i mentioned in my first post it won't recover the disk image because it says i need the network version of Acronis. The actual message says - 'The partition from the selected backup cannot be recovered because it contains a server operating system'. It goes on to say that I need to purchase the server version of the software. As I said, this works fine in version 9 so why the change in v10? The disk I am trying to copy is actually from a phone system and is not from a server as such although I suppose as it is using NT4 it is probably seen that way by Acronis. any ideas?

What file system is the disk formatted with?

And, did you try the ATI bootable Rescue Media as I suggested in my previous post.

It was probably done to force users to Workstation/Echo instead of the Home version on those systems. Those versions are all many years old and are no longer supported (I assume you actually mean version 9 & 10 and not 2009 & 2010).

Since TI 9 worked before is there a reason you're not using it now?

I'm not sure about the file system. The disk is from a phone system running NT4. Because Acronis didn't work I tried downloading Paragon backup and recovery 2013 which is free. After I had taken a backup image it showed the file system as NTFS but I wasn't sure whether that was correct or whether it was imposed by the backup. The disk didn't work after I recovered it to another disk so that might be the case.

What I am looking for a an exact image of a disk to copy to a blank disk so the new disk is an exact clone of the original. I have used this before on none NT4 disks and it works really well but it won't work with NT4.

By the way I noticed another posting from Mudcrab and realised I hadn't made it clear which version of True Image I am using. it is 2010 not version 10. I didn't realise they were different. NT4 can be backed up and recovered fine on the 2009 version.

Hi Mudcrab, thanks for your thoughts. I hadn't made it clear which version I am using. It is 2010 not version 10, I didn't realise they were different. NT4 can be backed up and recovered fine on the 2009 version but not on 2010.

It is a good idea to clone the current drive to an SSD, whether you want to upgrade to a larger drive or get a better performance. Since Windows doesn’t offer any built-in tools for disk clone, users can only use some third-party programs like Acronis True Image.

Acronis True Image is an integrated application that enables you to clone basic drives (both MBR and GPT) to other drives, even if the target drive is of a different capacity. For Acronis True Image 2017 or earlier, the cloning should be done from Acronis bootable media. 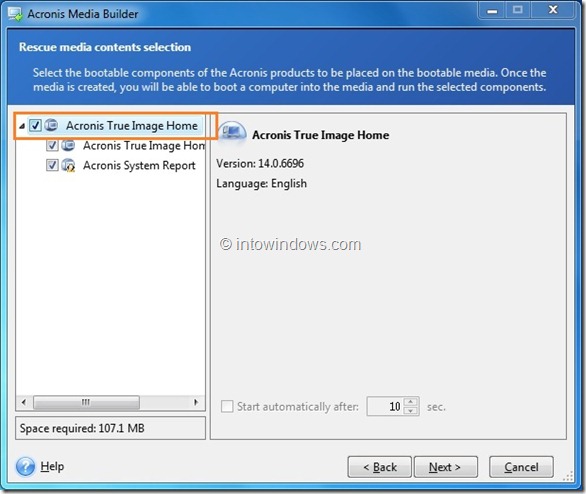 How to use Acronis True Image 2019 to clone to SSD?

Here takes Acronis True Image 2019 clone to SSD for example. Now, you can follow these steps.

Step 1. Connect the SSD to your computer. Make sure it can be detected. Launch this program to click Tools and Clone Disk subsequently.

Step 2. Choose whether to use Automatic (recommended) or Manual transfer mode. Then click Next.

* Automatic: the partitions will be proportionally resized to fit your target drive.

* Manual: change the disk partition layout as you wish.

Step 3. Select the drive that you want to clone. Then click Next.

Step 4. Select the SSD as the destination drive and then click Next.

Step 5. Specify files and folders that you don't want to clone on the What to exclude step.

Step 6. On the Finish step, ensure that the configured settings suit your needs. Then click Proceed.

Step 7. Wait for the process to be completed. Then this program will inform you of the next steps to take.

★Tips:
✍This program cannot be used to clone dynamic disks.
✍Note that the cloned drive will not have a letter within Windows. Once you boot a new device from this drive, a letter will be assigned automatically.
✍Ensure that the target drive has enough capacity to fit the contents of the source drive, when using Acronis True Image clone to smaller SSD.

AOMEI Backupper Professional is a hard drive cloning software similar to Acronis True Image, but with more features. It allows you to clone basic drives or dynamic drives to internal/external hard drives in a few simple clicks. Its stability enables it to run smoothly on Windows 10/8.1/8/7/Vista/XP. AOMEI Backupper allows you to do the following clone operations:

Besides, it is capable to improve the working performance of your SSD. Let’s see how it works.

Step 2. Select the drive that you wish to clone (here is Disk 0). Then click Next.

Step 3. Select the SSD as the destination drive (Disk 2). Then click Next. Tank thunder.

Step 4. Here you can have an Operation Summary. Tick SSD Alignment to accelerate the reading and writing speed of the SSD. Then click Start Clone.

★Tips:
✍Edit partitions: click it to resize partitions on the target drive. Three options are supported: Copy without resizing partitions, Add unused space to all partitions and Manually adjust partition size.
✍Sector by sector clone: as mentioned above, you could clone all the sectors on the source disk whether it is in used, blank, or even bad sectors, will be transferred to the destination.
✍After cloning, the source drive will not be wiped out. You can keep it as a backup or reformat the hard drive for other purposes.

For laptop or desktop that only one hard drive slot, shutdown your computer and remove the battery, use screwdrivers to replace old hard drive (HDD) with the cloned SSD, then boot the computer up.

In this article, you have learned how to use Acronis True Image to clone to SSD. However, if you need a more reliable and flexible way to clone your hard drive, AOMEI Backupper Professional could be your best choice. It has simple operation steps and comprehensive features.