(ThyBlackMan.com) Last week, Fredro Starr made an appearance on Power 105.1’s “The Breakfast Club” and got into a heated debacle with the infamous show’s star and primary celeb antagonist, Charlamagne Tha God. Apparently, Charlamagne referred to a time Starr spoke and said he received fellatio from R&B singer Brandy (he said this on tape,) and Starr didn’t like that and proceeded to flex his bravado. While many relished the idea of Charlamagne being “put into his place,” I personally was amused on the notion that Fredro Starr had to remind Charlamagne/the listeners that he still “bangs out” and he’s a “real nigga.” Well, aside from the fact that he’s 5’5 which makes him a candidate for the Napoleon Complex, Fredro Starr still appears to be stuck in the 1990’s where credibility was extremely essential to the rap act. The thing is, unless you’re inhabited to that mindset, no one particularly cares about rappers credentials anymore. So the question is, why did Starr felt it was needed to show he was still the hardcore rapper who was on “Slam?”

Besides Rick Ross and Plies’ persona breakdowns of 2008, the importance of rappers credibility has waned and declined in public opinion. With the reemergence of lyrics and dexterity in rap around 2009, fans have become more interested in the element that their favorite rapper can make timeless records instead of wondering about if their music persona matches the one in their “past life.” For instance, when 2 Chainz was robbed in broad daylight in San Francisco early June of last year, everyone pretty much knew that the bulk of his persona was crafted by the powers that be in order to reach a certain audience. Although he was a laughing stock and subjected to memes that ridiculed him, Chainz didn’t care, and after a while, America followed suit, too.

For Fredro Starr’s case, it appears he’s stuck in the old school days of rap in which gangsta rap dominated airwaves and was a blueprint to succeed in rap. Can we help that he feels that way? Not at all, but while he’s still banging out, Dr. Dre, Ice-T and Ice Cube put down their fictional guns and picked up other assets; such as being a super producer, launching headphones, acting in critically acclaimed tv shows and being an all-around mainstay in entertainment; rapping, touring while also writing/directing/producing tv shows and movies. While Fredro Starr has great acting talent, it will expand once he stops believing an A&R will physically harm him for stepping out of his rapping identity.

In the bitter end, it was Fredro Starr who looked exceptionally immature. It seemed he wanted to capitalize on letting those watching/listening that he wasn’t going to “put up” with Charlamagne’s pandering. Except that pandering is what Charlamagne does best. Since I’ve been listening to Charlamagne since the days he was the primary DJ in my hometown of Columbia, SC, nothing he says surprises me and it shouldn’t have surprised Fredro, either.

Trying to show you’re tough to Charlmagne is the equivalent of getting mad at a young child because he called you fat. Sure you can express some anger and hostility to your thoughts, but a child’s jib is to be direct. Charlamagne’s job is to annoy. So, Fredro Starr, remember; it’s 2014, not 1994. The general consensus doesn’t care for a 43 year old grown black man who still “bangs out.”

Tell us what you're thinking..
and oh, if you want a pic to show with your comment, go get a gravatar!

Things started out on a calm note as co-host Charlamagne Tha God was talking about rap groups of the 1990’s like Onyx not getting their just due. Angela Yee chimed in that they were one of the first rappers to go Hollywood and get movie and TV money. Then Charlamagne quipped that “Fredro was getting head from Brandy,” referring to his rumored relationship with the R&B star while they were filming the sitcom “Moesha.”

“You need to stop with all that. Let that be what it’s gonna be,” Fredro respondedgrowing visibly upset. “Stop bringing up the past, B. We move to the future. I ain’t got time for that.”

They segued to discussing an upcoming rhyme battle with rapper Keith Murray in Atlanta and the recent Total Slaughter event for a few minutes. However, after a brief mention of The Source Awards and asking Sticky Fingaz about allegedly beating up people on airplanes, Fredro asks Charlamagne about being “punched in the eye” outside of the radio station in 2012 and things went downhill from there.

Charlamagne snapped back about 50 Cent allegedly punching Fredro, who responded that 50 “ran like you.” Finally C asked why they have an issue and Fredro answered because he brought up “some slick sh*t” earlier in the interview.

The video then cuts to a clip of Fredro on a Forbes DVD saying that “the head was good” allegedly referring to his Moesha co-star. Watch the clip from the 9:00 minute mark to see where the conversation goes from there.

However, things calmed down by the end with Sticky Fingaz saying “Charlamagne I love you, son” and giving him a pound. The more sobering moment was when Fredro talks about late group member Big DS, who left Onyx after their first album.

“That was my best friend growing up. If he had the blue Reeboks I had the red ones,” Fredro said. DS died of Cancer in 2003. 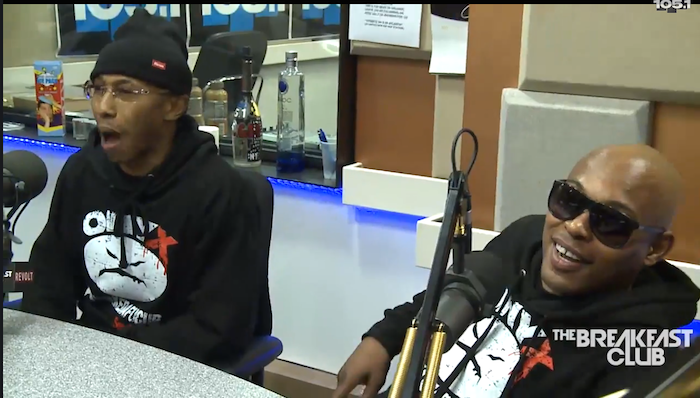