The Jitsi Meet Android SDK provides the same user experience as the Jitsi Meet app,in a customizable way which you can embed in your apps.

Subscribe for our new videos: Meet SDK source: documentation: https://github.com/jitsi/. Step by step guide for setting up Jitsi Meet - a secure open source video conferencing platform you can setup yourself in minutes. Based on advanced Jitsi Vi. There are some options to tweak the invitation link to unlock more features in Jitsi. The following parameters apply to the web, iframe and mobile version. All keys listed here are prefixed with config. You pick a key, combine it with its value using = and link parameters with &, e.g.

If you want to see how easy integrating the Jitsi Meet SDK into a native application is, take a look at thesample applications repository.

Build your own, or use a pre-build SDK artifacts/binaries

The repository typically goes into the build.gradle file in the root of your project: Build and use your own SDK artifacts/binaries

Start by making sure that your development environment is set up correctly.

A note on dependencies: Apart from the SDK, Jitsi also publishes a binary Maven artifact for some of the SDK dependencies (that are not otherwise publicly available) to the Jitsi Maven repository. When you're planning to use a SDK that is built from source, you'll likely use a version of the source code that is newer (or at least different) than the version of the source that was used to create the binary SDK artifact. As a consequence, the dependencies that your project will need, might also be different from those that are published in the Jitsi Maven repository. This might lead to build problems, caused by dependencies that are unavailable.

In source code form, the Android SDK dependencies are locked/pinned by package.json and package-lock.json of the Jitsi Meet project. To obtain the data, execute NPM in the jitsi-meet project directory:

This will pull in the dependencies in either binary format, or in source code format, somewhere under /node_modules/

Third-party React Native modules, which Jitsi Meet SDK for Android depends on, are download by NPM in source codeor binary form. These need to be assembled into Maven artifacts, and then published to your local Maven repository.A script is provided to facilitate this. From the root of the jitsi-meet project repository, run:

This will build and publish the SDK, and all of its dependencies to the specified Maven repository (/tmp/repo) inthis example. 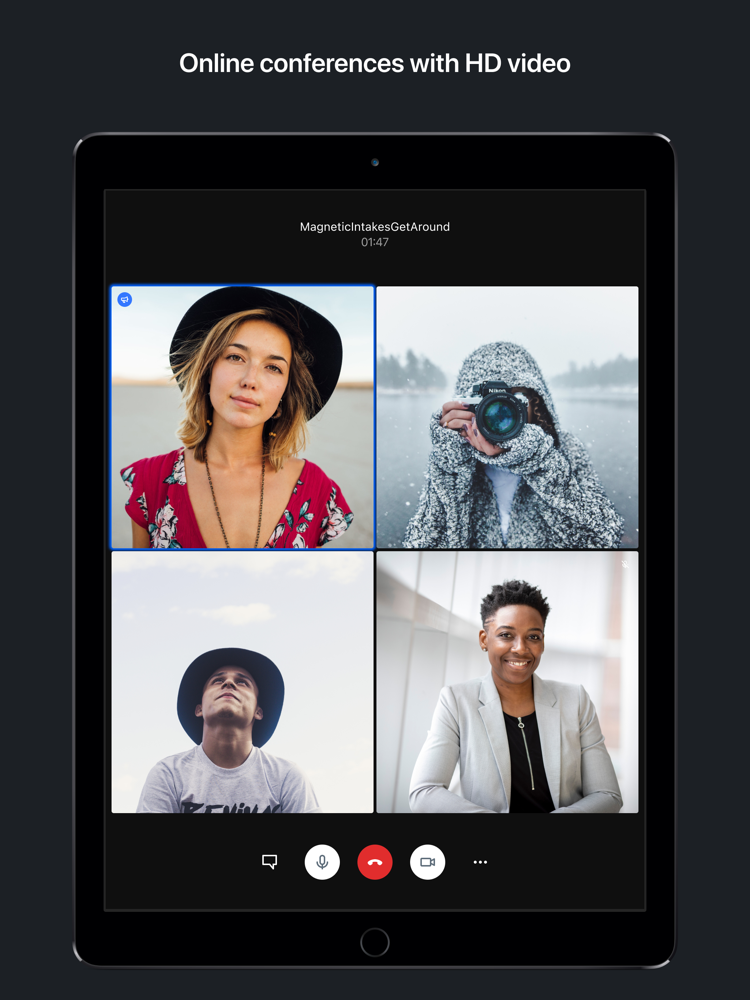 You're now ready to use the artifacts. In your project, add the Maven repository that you used above (/tmp/repo) into your top-level build.gradle file:

Then, define the dependency org.jitsi.react:jitsi-meet-sdk into the build.gradle file of your module:

Note that there should not be a need to explicitly add the other dependencies, as they will be pulled in as transitivedependencies of jitsi-meet-sdk.

Jitsi Meet SDK is an Android library which embodies the whole Jitsi Meetexperience and makes it reusable by third-party apps.

First, add Java 1.8 compatibility support to your project by adding thefollowing lines into your build.gradle file:

Note that this should only be needed when JitsiMeetActivity cannot be used forsome reason. Extending JitsiMeetView requires manual wiring of the view tothe activity, using a lot of boilerplate code. Using the Activity instead of theView is strongly recommended.

This class encapsulates a high level API in the form of an Android FragmentActivitywhich displays a single JitsiMeetView. You can pass a URL as a ACTION_VIEWon the Intent when starting it and it will join the conference, and will beautomatically terminated (finish() will be called on the activity) when theconference ends or fails.

The JitsiMeetView class is the core of Jitsi Meet SDK. It's designed todisplay a Jitsi Meet conference (or a welcome page).

Joins the conference specified by the given JitsiMeetConferenceOptions.

Leaves the currently active conference. If the welcome page is enabled it willgo back to it, otherwise a black window will be shown.

Releases all resources associated with this view. This method MUST be calledwhen the Activity holding this view is going to be destroyed, usually in theonDestroy() method.

Returns the JitsiMeetViewListener instance attached to the view.

Sets the given listener (class implementing the JitsiMeetViewListenerinterface) on the view.

This object encapsulates all the options that can be tweaked when joininga conference. 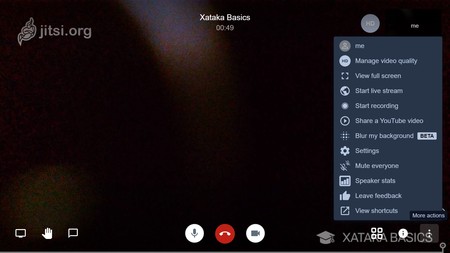 See the JitsiMeetConferenceOptions implementation for all available options.

This class handles the interaction between JitsiMeetView and its enclosingActivity. Generally this shouldn't be consumed by users, because they'd beusing JitsiMeetActivity instead, which is already completely integrated.

All its methods are static.

Helper method to handle results of auxiliary activities launched by the SDK.Should be called from the activity method of the same name.

Helper method which should be called from the activity's onDestroy method.

Helper method which should be called from the activity's onResume or onStopmethod.

Helper method which should be called from the activity's onSstop method.

Helper method for integrating the deep linking functionality. If your app'sactivity is launched in 'singleTask' mode this method should be called from theactivity's onNewIntent method.

Helper method to handle permission requests inside the SDK. It should be calledfrom the activity method of the same name.

Helper method for integrating automatic Picture-in-Picture. It should be calledfrom the activity's onUserLeaveHint method.

This is a static method.

JitsiMeetViewListener (deprecated - use Listening for broadcasted events instead)

JitsiMeetViewListener provides an interface apps can implement to listen tothe state of the Jitsi Meet conference displayed in a JitsiMeetView.

Called when a conference was joined.

Called when a conference was terminated either by user choice or due to afailure.

The dataMap contains an 'error' key with the error and a 'url' keywith the conference URL. If the conference finished gracefully no errorkey will be present.

Called before a conference is joined.

The SDK broadcasts several events that the users can listen for.

Please see JitsiMeetActivity, which registers for all the events and can serve as an example. Sourcetree eclipse.

Broadcasted when a conference was joined.The data HashMap contains a url key with the conference URL.

Broadcasted when the active conference ends, be it because of user choice orbecause of a failure.The data HashMap contains an error key with the error and a url keywith the conference URL. If the conference finished gracefully no errorkey will be present.

Broadcasted before a conference is joined.The data HashMap contains a url key with the conference URL.

Broadcasted when audioMuted state changed.The data HashMap contains a muted key with state of the audioMuted for the localParticipant.

Broadcasted when a participant has joined the conference.The data HashMap contains information of the participant that has left.Depending of whether the participant is the local one or not, some of them arepresent/missing.isLocalemailnameparticipantId

Broadcasted when an endpoint text message is received.The data HashMap contains a senderId key with the participantId of the sender and a message key with the content.

The SDK listens for broadcasted actions from the users and reacts accordingly.

The intents can be build manually (as shown above) or through the methods in BroadcastIntentHelper. 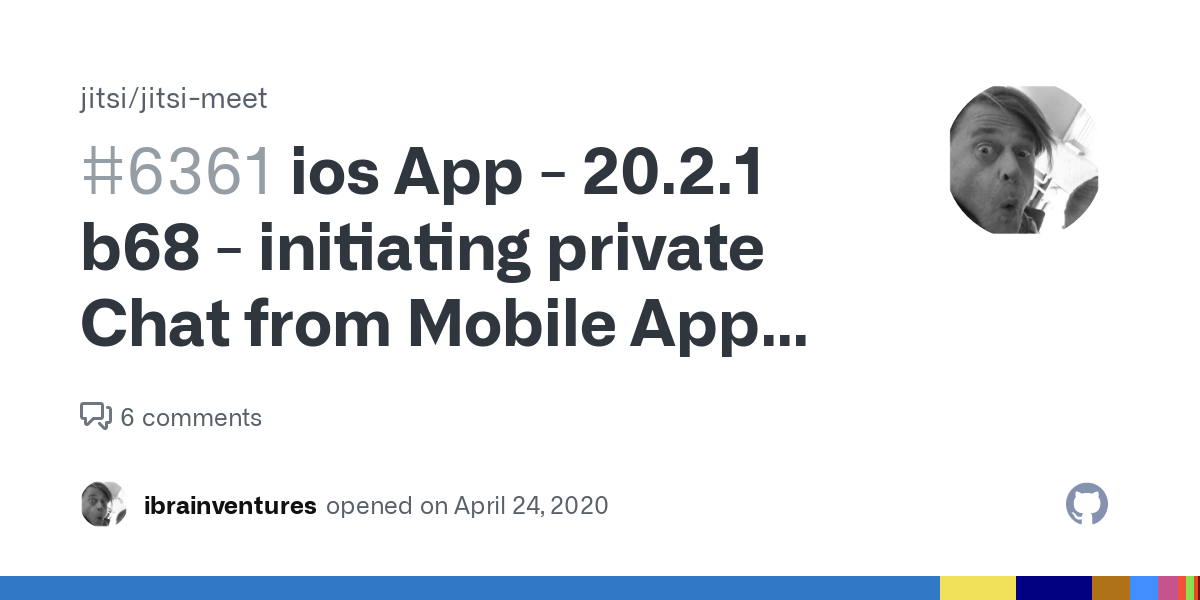 Sets the state of the localParticipant audio muted according to the muted parameter.Expects a muted key on the intent extra with a boolean value.

The localParticipant leaves the current conference.Does not expect any extra value.

Sends a messaage via the data channel to one particular participant or to all of them.Expects a to key on the intent extra with the id of the participant to which the messaageis meant and a message key with a string value, the actual content of the message.If the to key is not present or it's value is empty, the message will be sentto all the participants in the conference.

In order to get the participantId, the PARTICIPANT_JOINED event should be listened for,which data includes the id and this should be stored somehow.

When using the SDK on a project some proguard rules have to be added in orderto avoid necessary code being stripped. Add the following to your project'srules file: https://github.com/jitsi/jitsi-meet/blob/master/android/app/proguard-rules.pro

JitsiMeetView will automatically adjust its UI when presented in aPicture-in-Picture style scenario, in a rectangle too small to accommodate its'full' UI.