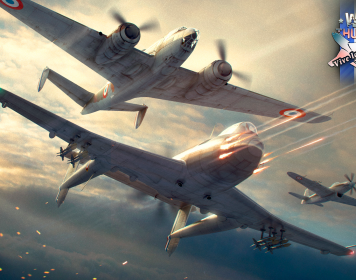 The Ju 288 C was designed as a Schnellbomber (fast bomber) with the purpose to replace the current Junkers Ju 88 bombers in service. Though a potent bomber in its own right, the Ju 88 suffered what ended up being crippling features such as a relatively small internal bomb bay requiring extra ordnance to be ferried on external hardpoints which ultimately increased the aircraft's drag coefficient, resulting in less efficient flight performance.

Though a contest was held to choose the next generation of medium schnellbombers, the RLM had already determined the Junkers Ju 288 C was the clear winner and even let Focke-Wulf, Dornier and Henschel continue to pursue their prototypes in vain. Out of the gate what caught the eye of the RLM was that the Ju 288 C was to be slightly larger than the Ju 88, the new prototype contained a pressurized cabin allowing for higher altitude flying, faster speeds, further range, excellent defensive capabilities and a much larger bomb payload. Such hope was put into this aircraft that it was slated to replace all bombers within the Luftwaffe inventory.

Though the aircraft itself was a huge success, the engines and landing gear ended up crippling the development of the aircraft resulting in only a handful of prototypes being built with a few being hurriedly outfitted with defensive weapons and used as a reconnaissance bomber. One interesting feature of this aircraft is the usage of remote-controlled gun turrets much like those found in the American P-61 and A-26 strike-fighter/attackers. The guns operated outside of the pressurized cockpit and allowed them to be placed in areas which more efficiently defensively protected this aircraft. Any fighter aircraft attempting to tail this bomber will receive a rude awakening when their aircraft is all of the sudden full of holes, the engine has quit, fluids are leaking, and the ground is approaching at an extremely quick rate showing no sign of stopping!

The key for the Ju 288 C to be a Schnellbomber is to actually deliver its payload to a target and for an aircraft its size and speed, it can deliver up to an amazing 3,600 kg (8,000 lb) payload, easily enough to put a serious dent in the enemy's bases or anti-aircraft vehicles and tanks. Smaller payloads can also include up to 36 x 50 kg (110 lb) bombs which can be very effective when it comes to carpet bombing columns of vehicles or taking out anti-aircraft artillery and other vehicles and pillboxes scattered around the map. Payloads such as this can provide area denial to airfields in matches where aircraft need to land to capture the point.

Speed, agility and payload make this bomber a great choice to aid your team in making short work of enemy targets while providing a faster and more difficult target to take out compared to contemporaries such as the lumbering B-24, Tu-2 and the P.108B bombers. 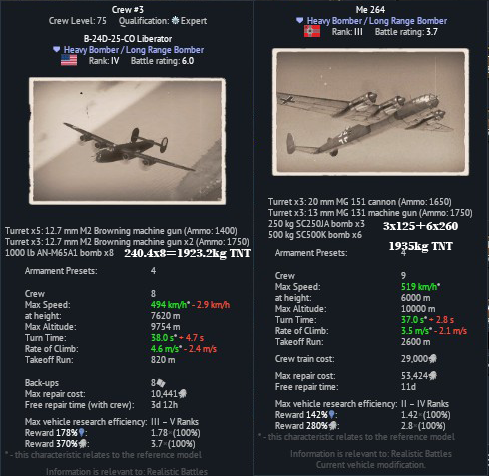 For those pilots who have flown many slow and heavy bombers just to get a decent payload to the target will be thoroughly refreshed when getting behind the controls of the Ju 288 C. Quickly apparent is the speed of this bomber. As its type suggests, Schnellbomber, this aircraft is fast, topping out just over 600 kph (375 mph) and agile enough to manoeuvre when attacked as not to be a 'sitting duck' like many of the larger contemporary bombers such as the American B-24 and the Italian P.108B which are easily 120 kph (75 mph) slower and much less agile making for a tempting target even for the least experienced fighter pilot to attempt to eliminate.

For many aircraft, speed is life, but speed for this Schnellbomber not only is life but what gets the ordnance to the target. The Ju 288 C does have a pressurized cabin which allows the aircraft to fly at higher altitudes where it can bomb bases with accuracy with 1,800 kg (4,000 lb) bombs, but this bomber is also very capable at flying lower altitudes and even terrain hugging where it can release up to 36 x 50 kg bombs on unsuspecting vehicles before they have a chance to scatter or hardened anti-aircraft structures filling the sky with flak. The Ju 288 C also has the ability to operate as a dive bomber given that it has dive brakes in the wings which will help slow its speed and maintain its heading during a dive to ensure a relatively smooth bombing run, after bombs have been dropped, the aircraft can retract the flaps and power up and move onto the next target.

There's usually 2 ways to play Ju 288 C: stay high or dive. Most people play Ju 288 C dive and take as many bases for themselves. When diving, try to watch your IAS and keep it at around 400 mph, don't go over that speed. The second way to play is stay high, when staying high, you will see enemy bombers that you can hunt with your superior fire power. When bomber hunting, try to get next to them, match their speed, and gun the hell out of them. Usually bomber hunting will cause you to sustain some damage.

The Ju 288 C can be outfitted with the following ordnance:

As a bomber, you spawn at a higher altitude, where you can use this advantage to dive to the base you want to destroy. However, do not exceed 690 km/h (430 mph), or the wings will break. A great indication of this is when your wings start to shake uncontrollably - by then, it would be apparent that you need to slow down. A good idea for more savvy pilots would be to use the Manual Engine Control to turn off automatic radiators and fully open them, allowing you near unlimited WEP without overheating and letting you keep as much altitude as possible for a possible emergency dive away from enemy fighters.

In Air RB, there are two predominant types of maps - standard-HP maps and double-HP maps. Standard HP maps typically have three bases, with some exceptions such as the 'Air Battle' maps, which have four bases. These bases take a single SC 1800 each, meaning that you can bomb two bases in a single run, yielding just over 1000 points. Note that the airfield is a bombing target once all bases are destroyed. However, about half of the maps you see in-game are 'Operation' maps, with four bases and no airfield. These bases take both SC 1800 bombs to destroy, and often feature four AAA emplacements on the edges of the base. When attacking these bases, a great strategy is to drop the bombs at the edges of the base, instead of at the centre. Because of the massive blast radius of the SC 1800, this enables you to kill several AAA emplacements along with the base bombing, which yields additional Silver Lions and RP. 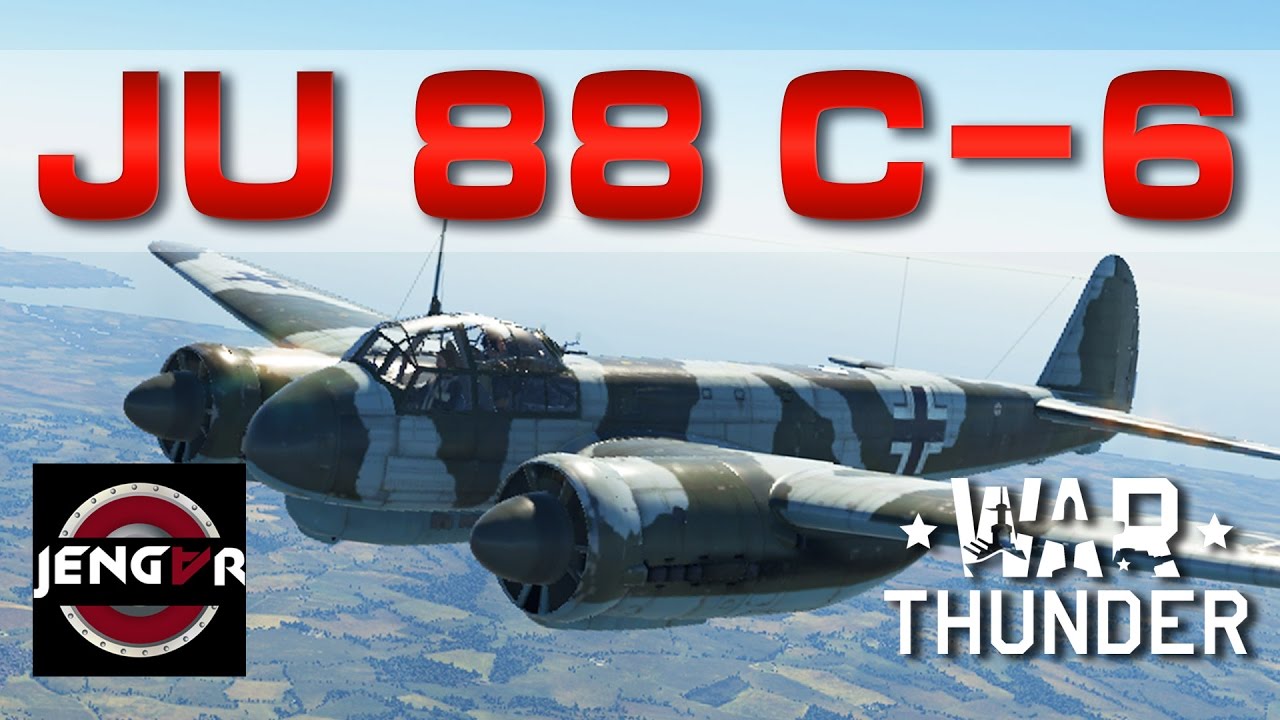 Typically, the best strategy for the Ju 288 when bombing is to utilize the Schnellbomber qualities of the aircraft, and put the aircraft into a 10-degree dive towards the base. For most 'Operation' maps, this means that you can bomb the base well before enemy fighters can even see you appear on their screen. After you have dropped your bombs, return to base and reload bombs; the advance airfield (smaller airfield closer to battlefield) works better as long as there are no enemies close by, as you will get airspawn for many of those bases. Fly back, bomb, return to base, repeat. This strategy is simple, effective, and extremely profitable in terms of SL and RP.

The Ju 288 C is a juicy target and will often be targeted by allied fighter pilots. As a result, defensive flying is a must. If you see a fighter coming in for an attack run, the best strategy to use is to dive away - this works significantly better if the Ju 288 C has an energy advantage, as it can outrun most planes at its BR in a dive. However, if they are faster than you (i.e. the F2G Super Corsair), level out and fire on them using your defensive guns. The Ju 288 C is surprisingly well-armed in terms of defensive armament, featuring six 13 mm machine guns and a tail-mounted 20 mm cannon. Try to keep enemy fighters on your tail, as the 20 mm cannon can load Minengeschoß (mine-shell) ammunition that is incredibly damaging against air targets. Finally, avoid all head-on engagements - though the Ju 288 has two pilots, it is not too durable, and a frontal burst from an enemy fighter can easily knock out both pilots. In 1939, the Junkers company began work on a new bomber that was supposed to replace the Ju 88 bombers in service at the time. The new aircraft had to surpass the predecessor across all parameters. The plan was to fit the upcoming model with new, more powerful engines, significantly boost the firepower of the defensive armament, and, of course, increase the payload. The first prototypes took to the skies when the Jumo 222A/B engines, which the aircraft were supposed to be equipped with, had not been installed yet. Instead, the BMW engines were used. Extensive work began on the experimental models of the new series, which received the designation Ju 288, with the aim of enhancing the bomber's characteristics. This explains why the first eight prototypes were significantly different from one another. 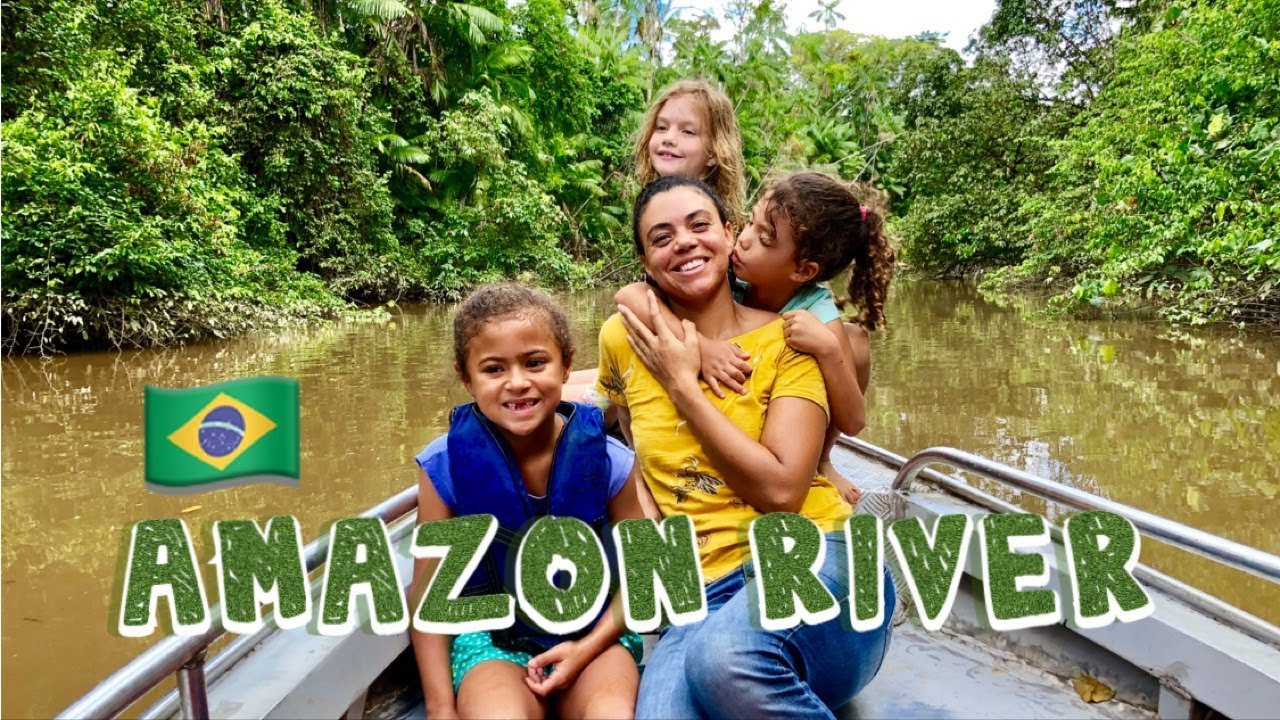 In 1942 the Ministry of Aviation made a ruling to include a fourth member in the aircraft crew, which demanded changes to be made to the build of the cockpit. Vehicles of the second-generation prototype series with the letter 'B' in their designation had their wingspan increased and their defensive armament changed. The Jumo 222A/B engines still required more work to be done and thus weren't installed on the Ju 288Bs. The Ju 288Cs, the third-generation prototypes of the series, were fitted with the Daimler Benz DB 605 engines, requiring the nacelles to be changed. Furthermore, the wingspan of the aircraft was increased even more and the defensive armament received another modification – this time, a lower rear turret was added. The Ju 288C's first test flights began in the spring of 1943. Junkers even prepared three versions of the new bomber build for serial production, each with a unique armament set. However, in June, the engineering department notified the aircraft manufacturer to discontinue work on the Ju 288 due to a lack of resources required to produce the new aircraft. Tests on the Ju 288 continued right up to 1944 – the aircraft even went on a number of combat flights. However, in the end the bomber was never approved for serial production.